At Nerstane we are aware that there are a range of breeding and selection systems used in the Merino industry. Our aim is to maximise genetic progress in achieving our breeding objectives. If there is a system available that will do that more efficiently than our current index based system we would be very keen to capitalise on it. 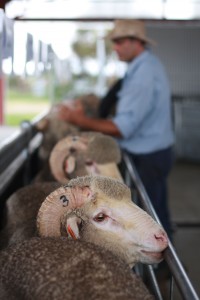 Our aim is to maximise profitability for our clients

We spend a considerable amount of time and effort in keeping up to date with breeding technology. Our research to date, combined with the results we have achieved, indicates that our current system is the best available. Feedback from our clients supports this belief.

The Nerstane breeding program is designed to maximise genetic progress and to deliver maximum benefits to our commercial clients. To appreciate the Nerstane breeding system it is necessary to be familiar with the major events that occur during the year leading up to the selection of stud sires, sale rams, stud and flock ewes. The selection system is based on accurate, measured data and thorough visual assessments.

The aim of all selection programs should be to identify those animals with the best genes for the traits in the breeding objective rather than those animals which simply look the best.

An animal’s performance is determined by its genes and by how it is managed (i.e. nutrition and health and by other non genetic or environmental effects). Examples of non genetic effects include the difference in age due to the spread of lambing, the age of a lamb’s dam (maidens lambs do not grow as well as those from adult ewes), the birth status of the lamb i.e. single or multiple or the paddock effect if a drop of lambs is not run as one mob until assessment. 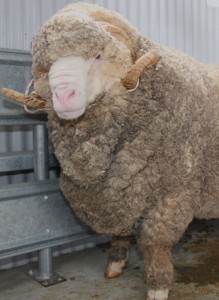 Selection must be based on accurate and unbiased data

At Nerstane both the ram and ewe selection programs are organised to account for these factors so that ALL selection decisions are based on accurate and unbiased data.

Ewe and ram weaners are managed as separate mobs and receive equal management until shearing when performance data is collected on measured traits. The effect of the differences in age due to the spread of lambing is eliminated by weaner shearing; dam age is recorded for all lambs and appropriate adjustments are made to the progeny of maidens. Similarly twin and single born animals are identified and their performance adjusted.

The use of a two stage selection system for both stud ewes and potential sires has been incorporated into the Nerstane system because it has the potential to improve the accuracy of selection by as much as 25%. This system involves combining the fleece weight and fibre diameter performance from two shearings and re ranking the animals in relation to the whole drop.

All fibre testing is performed at a Rampower accredited laboratory. The analysis of all performance and pedigree records at Nerstane is carried out by NSW Agriculture’s Advanced Breeding Services based at Orange and Sheep Genetics Australia. Additionally, every opportunity is seized to increase the rate of genetic gain. Breeding technologies such as artificial insemination (AI) and multiple ovulation embryo transfer (MOET) have been used for some years to capitalise on superior genetic material both from within the Nerstane stud and from other studs in the industry.

AI is a very efficient strategy to spread the influence of superior sires and MOET in a similar manner is used to make the best use of the high performing ewes.

The program has proven to be very successful over the years with some of our best sires including N2, N142, N43, N949, and N910 all being ET born lambs.

The use of visual classing combined with measurement of important traits is a feature of the ram selection program. 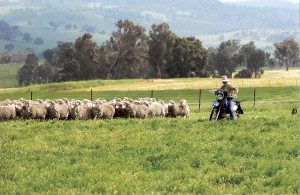 At the classing in September all rams are scored for a range of visual traits.

This visual assessment data is recorded and is used at the final classing in December – January in combination with the recorded data on measured traits to provide a full evaluation of all rams, particularly those involved in the progeny testing program.

All recorded data for both measured and visually assessed traits can be made available to clients when purchasing rams at any time. 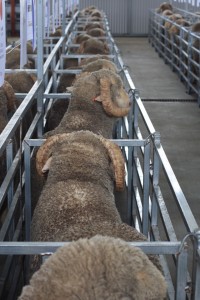 It is also important that environmental or non genetic effects such as management differences do not influence the results of the progeny test. To guarantee this, all ewes involved in the progeny testing program are run together except for the four week joining period and lambing period. After the lambs are identified all ewes and progeny receive identical treatment until their performance is measured and assessed.

All introduced sires are subjected to the same progeny testing program and are only used further in the stud if they perform better than the home bred sires. 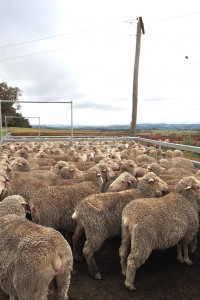 All ewes are candidates for selection into the stud

All ewes bred in both the stud and commercial flocks are involved in a thorough selection program which is designed to identify the most productive replacements to promote to the ram breeding level.

By having all ewes as candidates for selection, the selection pressure for both visual and measured traits is substantially increased.

Details of the program are presented in the table below.The stud ewe flock of 2000 ewes is divided into two tiers on the basis of measured performance (Index rank) and visual excellence. The top tier (Special Studs) consists of 600 ewes which are joined in single sire joining groups to proven sires identified through the progeny testing program.

The AI program is also conducted at this level. Semen is purchased from carefully selected rams that have a proven record in the industry. Performance data from Central Test Sire Evaluation programs is highly regarded when choosing AI sires.

Stud ewes not involved in the progeny testing program are syndicate joined to the remaining proven Nerstane sires. When the ewe syndicates are selected, the finer ewes are allocated to a separate syndicate (fine stud syndicate).